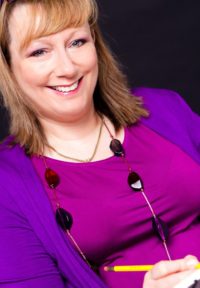 April Hardy writes romantic comedies set in and around the New Forest, where she grew up.

Hazard at the Nineteenth (Accent Press) tells the story of the Hazards, an upper-middle-class family, whose world is upset when son Jonathon proposes to working-class Stella. Stella’s always believed her future mother-in-law doesn’t like her, but when Joyce 'accidentally' gives nut allergy-sufferer Stella a piece of nut-filled cake, she wonders how far Joyce is prepared to go to get rid of her. Will Stella ever make it down the aisle or is she destined not to fit in with the Hazards?

April currently lives in the UAE with her husband and their deaf, arthritic cat, where she is delighted to have found herself so unemployable that she’s had plenty of time to devote to her writing.