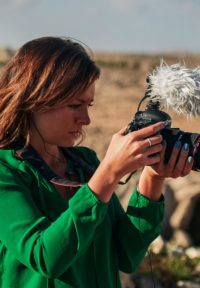 Bel Trew is The Independent’s Middle East & North Africa correspondent, a region she has covered since the start of Arab Spring in 2011. On joining The Independent in 2018, she launched the eight-part series Water Wars, which aims to spark a shift in public attitudes towards the environment and security responses to key resources like water.

Bel was previously a journalist with The Times, and was based in Egypt for seven years until she was arrested and deported in 2018. During her years in Egypt, she covered the last two wars between Israel and Gaza, followed the emergence of IS in Tunisia, and covered illegal migration extensively. In addition to her reporting, she also ran two English-language news websites on Egypt and Libya, and acted as an analyst on these countries. She was longlisted for International Journalist of the Year in the One World Media Awards 2019.

Bel is currently working on a nonfiction book about her time in Egypt.

In another life, before becoming a foreign correspondent, she was a features journalist for Tatler, The Evening Standard and others. Bel was born in the UAE, and grew up between the Gulf and the Baltic States.