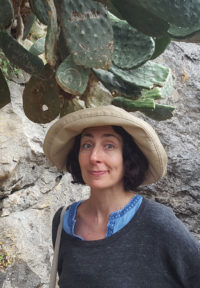 Francesca Gambatesa is an exciting new talent in illustration. She is the illustrator of The Sacconejolys and the Great Cat-Nap (Egmont), the first picture book by YouTube sensations the Saconnejolys, as well as two picture books by David O'Connell, When I'm A Mummy Like You! and When I'm A Monster Like You, Dad! (HarperCollins).

Her latest picture book is The Dinosaur Who Lost Her Voice (Egmont), written by Julie Ballard, which is the heart-warming tale of young dino Milly who finds a new way to shine when she loses her singing voice in an accident.

Francesca has also illustrated picture books for Penguin Random House, Pearson and Usborne, as well as creating artwork for BBC and Greenpeace.

Francesca was born in Beirut, living and working in Istanbul and Rome before she moved to London in 2008. She originally trained in animation, trying many different styles and media, before becoming an illustrator.