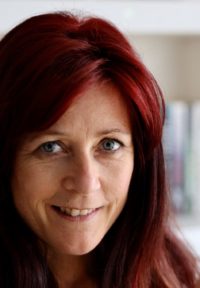 Ginger Jones grew up idolising comedy writers and as a consequence has written and directed several stage plays, from pantomimes sponsored by Eurostar, to comedy plays performed at the Edinburgh Fringe, Brighton Fringe and in fringe theatres in London.

You Had Me at Halloumi (Bonnier) is Ginger Jones' hilarious, new romantic comedy. Freya Butterly has always dreamt of being a Head Chef but despite running every service at the Mediterranean restaurant, she still doesn't get the recognition she deserves. Freya takes matters into her own hands, ditching both her job and unsympathetic boyfriend she heads for sunny Cyprus determined to rediscover her passion for food. Enter, Xanthos. As gorgeous as he is charming - he's quite the dish - but this trip was about Cypriot cuisine, not Cypriot sausage romance. But if she walks away, will Freya spend the rest of her life wondering What If?

"Sparkling with wit and warmth, this charming romance from Ginger Jones is utterly delicious." Woman's Own