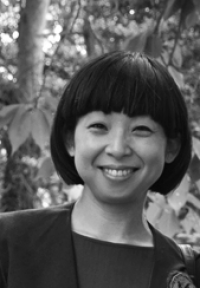 Natsko Seki grew up in Tokyo and studied at Keio University before moving to England. After graduating from the University of Brighton with a degree in Illustration, she moved to London where she has worked on an increasing number of worldwide commissions, including for Transport For London and Louis Vuitton.

Natsko's published titles include Architecture According to Pigeons (Phaidon Press) by Stella Gurney, and Am I Big or Small? (Fukuinkan Shoten) by Masahito Ohashi. She also wrote and illustrated On a Double Decker Bus, published by Fukuinkan Shoten.

In 2016, Natsko was commissioned by the Dulwich Picture Gallery to create an illustration to be used across a range of merchandise. Visitors to the gallery enjoyed posing as characters from its paintings, which Natsko then collaged into her artwork. Her first solo exhibition, 2s, 3s and 4s, was held at the Daiwa Foundation in 2017.