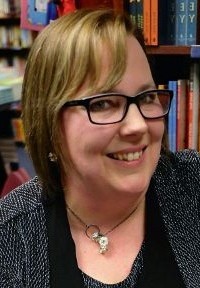 Teri Terry burst onto the YA scene with the publication of her multi-award-winning Slated series (Orchard UK/Nancy Paulsen Books US), which has sold over 400,000 copies worldwide.

Dark Blue Rising (Orchard, July 2020) is the first in a new trilogy following Tabby, who's life is shattered when her mum Cate is arrested and Tabby discovers that Cate isn't really her mother. Cut off from the outside work and plagued by symbols that follow her everywhere, Tabby must uncover the lies she's been told about her past and the terrible secret hidden in her very DNA.

Teri lived in Canada and Australia before moving to England. She has written an MA on the depiction of terrorism in young adult fiction. Her work has been translated throughout the world.