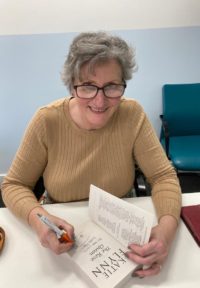 Katie Flynn is the author of bestselling novels which have sold over 5 million copies worldwide. Her first book, A Liverpool Lass (Penguin), was published in 1993.

Katie Flynn was the pseudonym of the author Judy Turner, who was inspired to write the novels after hearing family recollections of life in Liverpool during the early Twentieth Century. Judy sadly passed away in January 2019 at the age of 82. Her daughter Holly worked as her assistant for many years and together they co-authored a number of Katie Flynn novels, including Christmas at Tuppenny Corner (Penguin). The Katie Flynn legacy now lives on through Holly who writes new books, often based on ideas she discussed with her mother.

Holly lives in the North West with her husband Simon and their two children. When not writing she enjoys walking her two lurchers Sparky and Snoopy in the surrounding countryside, as well as cooking forbidden foods such as pies, cakes and delicious puddings!