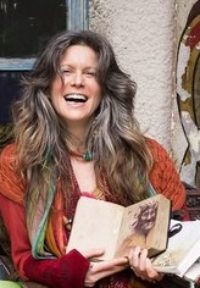 Katz Cowley is the award-winning illustrator of The Wonky Donkey (Scholastic), a story about a lovable three-legged ass with one eye and a flatulence issue which became an internet sensation and a runaway international success. The Wonky Donkey has sold over 3 million copies worldwide. It won the acclaimed NZ Post Children’s Choice Award and the Nielsen Booksellers’ Choice Award, as well as being a finalist in numerous other book and illustration awards. Her other books include The Fidgety Itch, The Bee's Sneeze, and Willbee the Bumblebee, all published by Scholastic.

Originally from London, Katz spent over 15 years living abroad, mainly in New Zealand and Australia, before returning to the UK. She now lives in Devon where she teaches workshops in drawing and creative self-expression, inspired by breaking through and befriending her own creative blocks.