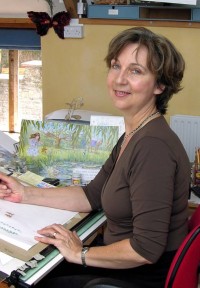 Penny Dale is an internationally bestselling children’s book author and illustrator who has sold more than four million books, with editions in over 20 languages. Her career highlights include Ten in the Bed (Walker), which sold two million copies, and Rosie’s Babies (Walker),with Martin Waddell, which won the Best Book for Babies Award.

Dinosaur Dig! (Nosy Crow UK, Candlewick USA) is the first book in her bestselling dinosaur series that is filling a boy-shaped gap in the market. Penny has now sold over 1 million Dinosaur titles and her latest title in the Dinosaur series is Dinosaur Christmas! (Nosy Crow).

Penny is married with one grown-up daughter and lives in South Wales.